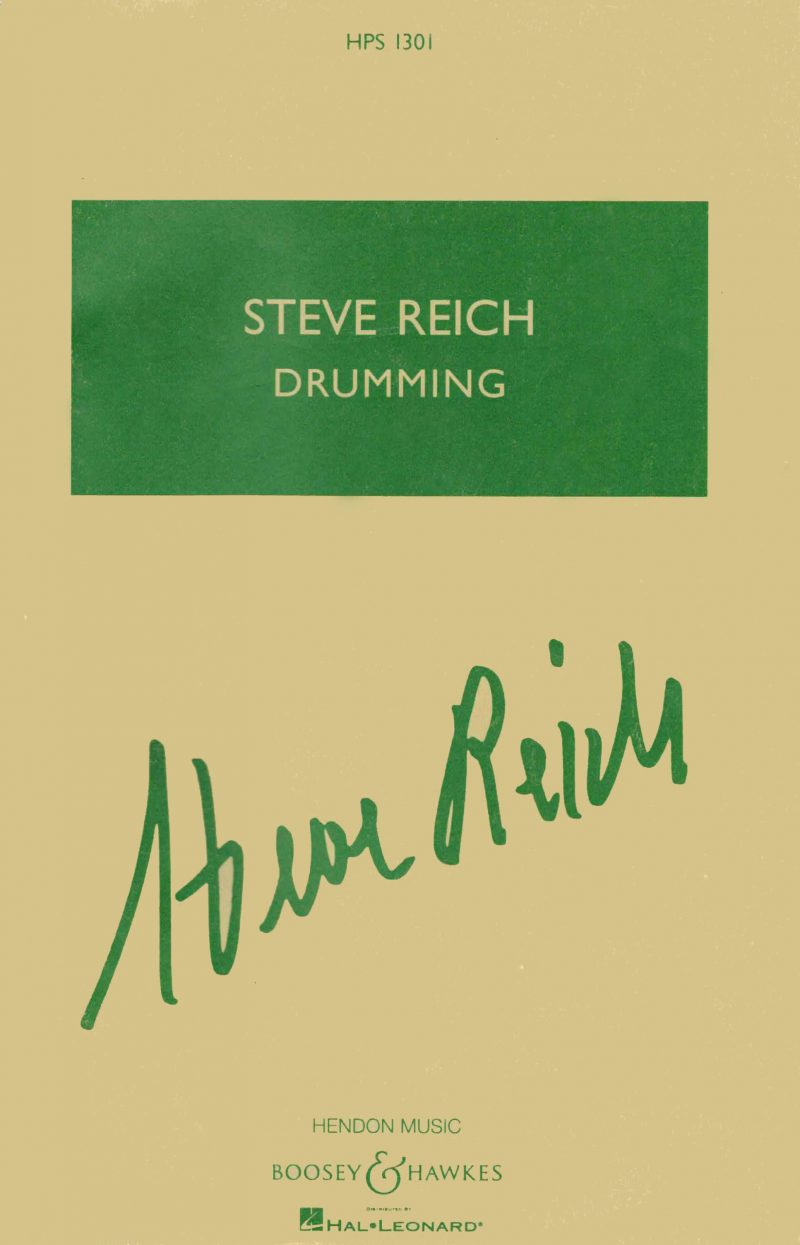 For one year, between the fall of 1970 and the fall of 1971, I worked on what turned out to be the longest piece I have ever composed. Drumming lasts from 55 to 75 minutes (depending on the number of repeats played) and is divided into four parts that are performed without pause. The ﬁrst part is for four pairs of tuned bongo drums, stand-mounted and played with sticks; the second, for three marimbas played by nine players together with two women’s voices; the third, for three glockenspiels played by four players together with whistling and piccolo; and the fourth section is for all these instruments and voices combined.

In the context of my own music, Drumming is the ﬁnal expansion and reﬁnement of the phasing process, as well as the ﬁrst use of four new techniques: (1) the process of gradually substituting beats for rests (or rests for beats); (2) the gradual changing of timbre while rhythm and pitch remain constant; (3) the simultaneous combination of instruments of different timbre; and (4) the use of the human voice to become part of the musical ensemble by imitating the exact sound of the instruments.

Drumming begins with two drummers building up the basic rhythmic pattern of the entire piece from a single drum beat, played in a cycle of 12 beats with rests on all the other beats. Gradually additional drumbeats are substituted for the rests, one at a time, until the pattern is completed. The reduction process is simply the reverse where rests are gradually substituted for the beats, one at a time, until only a single beat remains.

The sections are joined together by the new instruments doubling the exact pattern of the instruments already playing. At the end of the drum section (Part 1), three drummers are joined by three marimba players who enter softly playing the same pattern; the drummers gradually fade out so that the same rhythm and pitches are maintained with a gradual change of timbre. At the end of the marimba section (Part 2), three marimbas played in their highest range are doubled by three glockenspiels in their lowest range so that again, rhythm and pitch are maintained while timbre changes. In the last section of Drumming, all instruments and voices are combined simultaneously (for the ﬁrst time in my music) and the overall sound becomes considerably richer.

The voices in Drumming do not sing words, but precisely imitate the sound of the instruments. The women’s voices sing patterns resulting from the combination of two or more marimbas playing identical repeating pattern, one of more quarter notes out of phase with each other. By exactly imitating the sound of the instruments, and by gradually fading the patterns in and out, the singers cause them to slowly rise to the surface of the music and then fade back into it, allowing the listener to hear these patterns sounding in the instruments themselves. For the marimbas, the female voice was needed; for the glockenspiels, the high range of the instrument necessitated whistling, and in its extremely high range, the piccolo.

The sections, then, are not set off from each other by changes of key, the traditional means of gaining extended length in Western music. Drumming demonstrates the possibility of maintaining the same key for quite a while if there are instead considerable rhythmic developments together with occasional, but complete, changes of timbre to supply variety.

I am often asked what inﬂuence my visit to Africa in summer of 1970 had on Drumming. The answer is encouragement, conﬁrmation, and learning from another musical culture. It encouraged my natural inclination towards and training in percussion. I started studying snare drum at the age of 14. And, it conﬁrmed my intuition that acoustic instruments could be used to produce music that was genuinely richer in sound than that produced with electronic instruments.

My learning about African drumming began when, as a college student, I heard recordings. Then, in 1963, I read some of A.M. Jones’s Studies in African Music where he, with Desmond Tay, a Ghanaian master drummer, made the ﬁrst accurate scores of several Ghanaian traditional pieces by tapping metal pencils on metal plates on Jones’s drum pattern recorder. These scores showed that the music was made of short repeating patterns, generally of two, three, four, six, or 12 beats, played simultaneously but so that their downbeats did not coincide. This struck me as a radically different way of organizing music not found in the West, and also reminded me of the many rhythmic ambiguities inherent in subdivisions of 12. Still later, I took a few lessons with Alfred Ladzepko, another Ewe master drummer, who was working with Nicholas England at Columbia University.

Then, in 1970 the last piece I wrote and performed before my trip to Ghana was Phase Patterns, for four electric organs. It was built entirely out of the snare drum hand alternation rudiment, paradiddle: LRLLRLRR. During rehearsal one of the musicians in my ensemble joked, “You’re drumming on the keyboard, how about drumming on the drums?” and it struck me as a very sound comment.

Finally, in the summer of 1970, I traveled to Ghana to study drumming ﬁrsthand. While there I took daily lessons from Ghanaian master drummers, particularly from the Ewe tribe, recorded them, transcribed the patterns and their relationships into Western notation and eventually they were published.

When I returned home, the effect of my visit turned out to be conﬁrmation of gradually shifting phase relations between identical repeating patterns that I had used in Piano Phase and Violin Phase in 1967, but now with strong encouragement to develop these ideas further by returning to my own background in percussion. Additionally, I had learned that complex rhythmic counterpoint had a long history in Africa and, as I learned soon after, in Indonesia when I studied Balinese gamelan with Balinese teachers at the American Society for Eastern Arts in Berkeley in 1974.

As mentioned earlier, in the context of my own music, Drumming is the ﬁnal expansion and reﬁnement of the phasing process, a process discovered with tape loops that does not appear elsewhere in non-Western or Western music. Drumming also has only one basic rhythmic pattern throughout. This pattern undergoes changes of phase position, pitch, and timbre, but all the performers play this pattern, or some part of it, throughout the entire piece. 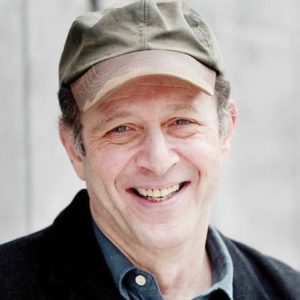